It started in 2016 at the Chichester National where a lot of campers were amazed to see a car from Jersey participating and  had expressed a wish to come to Jersey. Once back on the island the idea was put forward to our club and we agreed to try for 2018.

We definitively chose the right camp site, Beuveland  is a family site with great facilities, plenty of room, lots of space to eat and of course, the quintessential bar and very helpful and friendly staff from start to finish.

Cars started to arrive in a few days before the event, our club members taking turns the harbour to guide them to the site. The main bulk of the cars arrived Friday evening, mostly the French contingent.

Saturday:After a sketchy beginning (late opening of the restaurant for breakfast to the late arrival of the bread delivery) the briefing took place, the cars were lined up, maps distributed and sent forward onto Jersey roads, led by our club members.
First stop, the Steam museum, followed by a lovely picnic stop at Reg's garden, where our hungry revellers were able to find a place to sit and eat in a peaceful setting and meet the friendly owner Reg who went out of his way to make them feel welcome. Most of our visitors were amazed by the gardens and will remember as one of their highlight of the tour.

The route took the cars to Noirmont, Corbiere, five mile road, then en route to Battery Moltke for a visit and a drive to Grosnez, who turned out to be such a busy place, we were unable to park all 45 cars who had to go round the car park and stop outside the race course for the planned drone picture.
​
All came back to the campsite in good time to have a little rest before the "apero" were all were treated with either a glass of wine or a soft drink.  And it soon was time to head to the restaurant for hot food, more drinks and music. 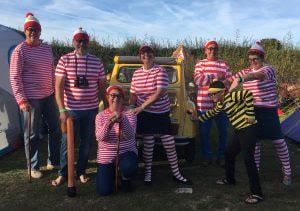 Our compliments to the Chef for his menu, especially the fish and chips which were a hit with all nationalities present!

The party lasted until 11pm., with "Le club les deuches du bout du monde" singing at the table and shall I say it? A little bit of pants showing from one of their member! Not to forget the group of misfits dressed as "wallies" and other groups. All I could hear was the sound of the fiddle playing, and lots of laughter all round.

And then it's over

Sunday morning arrived too quickly, I woke up early and took a walk at sunset through the camp, taking pictures of the cars and tents, all quiet apart from the occasional loud snoring coming from certain tents....

After a breakfast without incident, it was time to line up the cars again for a drive,  I jumped into Buzz with Chris and we set off last, to sweep up any stragglers and help lost cars to find their ways, and offer mechanical help (Chris, not me) when the cars were in trouble.

The main stop was on the Green in Gorey where we all stopped for picnic, and said good bye to those who needed to head straight for the ferry.
​
The week end casualties: 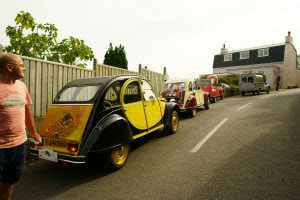 Titinne started with sticking her key in the starting position, over working the starter motor and having to be hot wired (thank you Ian for rescuing me when my hubby was elsewhere). One of the van's fuel pipe decided to disconnect itself and spread fuel all over its engine and saturating its insulation. One of the french car developed starting problems and then conked out in a bend on Rozel Hill, Chris came to the rescue and after a spark plug change everyone was back on the road. 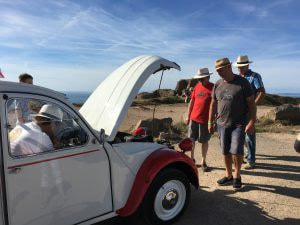 So no major casualties over the week end, however, I have had the opportunity to confirm my theory that each 2cv in distress is a "man trap", since as soon a the bonnet of a 2cv opens men rush to it like moths to the flame, so my advice to all single ladies out there looking for Mr Right; get a 2cv, open the bonnet, and emulate Miss Penelope Pittstop from the Wacky Races (for those of you too young to remember, stand helplessly next to the car, put a hand on your brow and yell faintly : " Help, I'm it trouble"), I can guarantee you that this work having tried it myself this week end.